Nora and Fredrik were together 20 years, and she had terrible migraine headaches the whole time. She could tough out a day with the help of medication, but her head rarely stopped throbbing.  She often felt nearly overwhelmed with pain, anxiety, and depression.

Fredrik and Nora loved each other, but there were other problems in the relationship. Last year, she convinced him to go to counseling, where she talked about the ways his total devotion to work was impacting her and their son.  She told him his long work hours and focus on social standing was a bad match for her socially conscious, family-time orientation.  She noted how his unexpressed anxiety was making her more anxious and asked him to be more open about feelings.

He responded by leaving her. In just a few weeks’ time, he filed for a divorce, which went through, forcing Nora to leave their upscale home and neighborhood, change Arne’s school, and return to work.

And her migraines stopped. They’re still lurking on the fringes, but they’re much milder and less frequent.  She has cut her medication way back. Though Fredrik is still doing things that trigger her, her depression has lifted along with her headache.  She still has ups and downs, but overall she feels better than she has in 20 years.

Those kinds of healings happen frequently. Here’s why I’m writing about it now. For months after the split, Nora would complain about Fredrik’s abrupt departure and unwillingness to work things out. She criticized his rush into remarrying a woman he barely knew. She was upset when he would call with some issue about Arne or their divorce settlements.  She rarely mentioned what a blessing the experience has been, liberating her from days of terrible pain and into a new life.

Nora’s getting over it now, but how about you? Do you notice the disguised blessings you are given? I often don’t. It might surprise you, but the benefits of my disability have been substantial. People give me all kinds of slack. The government pays me disability insurance to do good things. It’s not enough to live on, but it beats full-time work and gives me space to write and to volunteer. I learn wonderful lessons every day. The parking’s great. 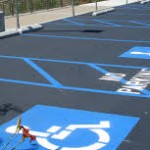 Would I give all that up for a healthier body? Yes, I probably would.  But if I only look at the negatives and ignore the benefits, I would be dishonest, as well as feeling unnecessarily miserable.

It’s not always easy to see the blessings, but I try. Recently my bladder function has become so bad that I have had to start catheterizing myself four times a day to empty it.  At first, I focused on the difficulty, discomfort, embarrassment, expense, and risk of infection. I thought of it as another step down the road to total disability and helplessness, all of which could turn out to be true.

What I didn’t notice was how much more comfortable I felt. I didn’t appreciate the ability to go out for hours without making sure a bathroom was close at all times.  I ignored how good it feels being able to sleep through the night.  I feel a connection with Nora; we were both ignoring our blessings.

Not seeing the positive is a common trait, isn’t it? In fact, noticing the blessing is rare enough that it catches our attention when somebody does it.  The British TV show “Call the Midwife,” based on Jennifer Worth’s books about midwifing in London’s poverty-stricken East End in the 1950s, has powerful scenes of poor people seeing blessings that were invisible to the nurses and to most viewers. 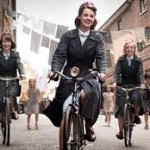 In one subplot, a nurse is doing regular wound care on a disabled war veteran living in a filthy studio in a housing project, or Council flats, as they are called in England. On one visit, he tells her “I’m so grateful. I never thought I would live in such luxury.”

She’s looking around at the bugs and the crumbling walls and thinking ‘What luxury? This place is a dump. The country is failing you.’ Then he explains, “I have food every day. I have a warm bed at night. As a child, I never dreamed of having comfort like this.”

The nurse and the audience are taken aback. I was in awe of this character, because he was seeing a blessing that most people couldn’t see. What a powerful attitude to have!

I have friends who would question his attitude, because if you’re grateful for a pittance, you’ll be lucky if the rich give you even that, and you certainly won’t get more. To me, though, happiness counts as much as material well-being. This war vet wasn’t deluded; he knew he had no power to change things. He was only noticing that his conditions could be and had been a lot worse, and he appreciated the improvement.

16th Century Spanish mystic Teresa of Avila was once called to spend some weeks with a noble family who wanted her spiritual guidance. She wrote that she had envied the rich and powerful, but no longer. “These women have the same hurts and fears we all do,” she wrote, “but they are not allowed to show them. I don’t envy them at all.” These noblewomen weren’t good at seeing their blessings, although they had so much in material terms. 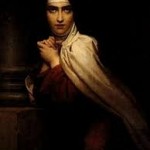 Why is seeing the world’s gifts important?  For one thing, a time will likely come when the benefits of life are not so obvious. When we’re young and healthy and not in poverty, we don’t need to pay special attention to the good sides of life. We can’t miss them. We can all act like the noblewomen of Avila and take our blessings for granted.

It won’t last forever, though. I can guarantee that. We all lose things that are dear to us. We all lose pieces of our good health; our bodies start to decline. That can’t be helped.  What can be changed is how we respond to our losses. If we can see the blessings, it takes the edge off our loss. In fact, those difficult times may be experienced as the best times of our lives. It’s working that way for me.

How is seeing the blessing different from looking on the bright side?  They’re pretty similar, but a blessing is something you can use, something that can guide you on your path. Looking for the blessing or benefit or lesson can enable us to appreciate things that seem a burden otherwise. We can turn negatives into positives.

This summer I’ve been helping out with three neighbor girls, age 9, 6 and 4.  Leona, Lisa and Joy are lovely, good-hearted children, but they are needy. Being raised by a disabled grandmother in poverty doesn’t get you much positive attention, trips to nice places, non-TV time or good food to eat. They have a lot of nervous energy; they can be exhausting.

I started taking them to the playground, reading with them and giving them snacks, but not because I wanted to. I just thought they needed the help. After a week, I asked myself, ‘This is hard. What am I getting out of this? What is the world teaching me here?’

They are fun to watch, and they can be wonderfully sweet, but still, I was putting out a lot of energy providing a very low level of help.  Then I realized, ‘I’m learning to say no. I’m learning to set limits.’ Embarrassing that I’m still a beginner at limit-setting, but it’s been quite helpful to have children to practice on. If I can’t set limits on a six year old, how will I deal with an aggressive adult?

I didn’t realize until this week that it’s working.  On a bus ride, a woman was berating the bus driver for making her use the back door. After a minute of her non-stop insults, I asked her “Do you really think this is doing any good?” She stopped yelling at the driver and started criticizing me instead. But her voice was a lot lower and it was easy to ignore her.

Sometimes a blessing takes the form of a lesson worth knowing. A few nights ago, during a discussion at a meditation class, a homeless man continually interrupted a woman when she tried to speak. The fourth time, I said firmly, “You’re interrupting.” He stopped, but two minutes later he got up and grabbed his stuff to leave, angrily saying he was never coming back. He said he was only trying to participate and I had been out of line.

What was the blessing in that? I didn’t pick up on it right away.  I responded, “Well, your behavior was rude. You were acting in a male chauvinist way.” He loudly said, “I wasn’t trying to be” and walked out slamming the door. After a minute, the emotional content of the event sunk in.  I realized he was only angry because he was hurt. He probably has a lot of hurt, and calling him out triggered something painful. That doesn’t make either of us right or wrong, but it was a powerful lesson for me to realize that when people act angry, they are probably in pain.

We have to protect ourselves in such situations, but our emotional response should probably be empathy and love.  Don’t take it personally. I think that lesson will help me in life.  I thank him for it and hope I have a chance to pay him back.

A good practice might be to look for the blessing any time it’s not obvious. That might save a lot of frustration and annoyance.  I’m going to try for a while and report back.