The Story of Your Life

You could take that approach, but it often leads to painful self-blame, criticism, “if onlys” and “should haves.” It’s stressful. Seeing your life as all about you shrink-wraps your story into a package the size of your own head. You lose your context. You may even miss much of the meaning of your own story, of what makes you really valuable.

How you think of your life can make a big difference in how you live it and how you feel it. I noticed this with my mother June’s recent death at age 91. Like most of us, my mother thought she was living in a biopic. She spent much time criticizing herself for things she had done wrong and constantly seemed to be making up new things to self-criticize. She fed her children the wrong food. She was too strict about some things and too lax about others. She should have worked harder to hold on to my Dad. 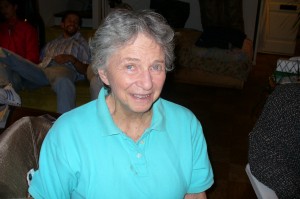 Her life wasn’t ruined by these thoughts. She was happy most of the time and did some beautiful things. She was loved by family, friends and colleagues. But it wasn’t until near the end, when she started to look at a bigger picture that she gained peace with her life.

At June’s memorial, I gave a mini-eulogy. I could have presented her life as a multi-generational family drama. How her grandparents’ lives led to her parents’ emigrating to the U.S., how much of herself she put into her children and grandchildren. Thinking about that, I realized that my life is part of the story of my mother’s life. Her story isn’t over. What I do and what my children do adds to the narrative. Her 91 years are a couple of acts in a much longer play.

Or we could have thought of it as a historical drama, sweeping in scope, in which she played a small but important part. What was happening in the world, how did it change her, how did she influence the world?

If Mom had seen her life as a historical drama, she might have taken a more tolerant view of herself.  Immigrant parents trying to make their way, discrimination as a Jewish girl in upstate New York, the Depression, and World War 2 made her early life an adventure story. The postwar push to remove women from the workforce, described by Betty Friedan in The Feminine Mystique, forced my intellectual and activist mother into a homemaking career, which would not have been her first or second choice. After my father left, she transformed that experience into a strength, earning advanced degrees in psychology. She created Project Eve; a groundbreaking program for women reentering the workforce after the feminine mystique failed them, as it had failed her after her divorce.

That’s lot of history to be part of (and there was more.) To examine her life without awareness of her times would not allow understanding, but how many of us look at our lives with such awareness?  Usually, we’re too busy thinking it’s all our fault.

I think my mother came to see her life from the outside near the end. She started saying she was “ready to go” “I’ve had a good life,” and things like that. Part of that readiness may have been fatigue; she was slowing down and becoming less able.  But part of it seemed to be a sense that “I have done what I came here to do.  I have done enough.” She was able to let go peacefully and without suffering.

These different views reflect the difference in perspective between memoir and biography. Someone else writes your biography. They include your parents’ stories; your social milieu, the political trends of your times that affected you. A biography is about what the subject did, but also why they did it. A memoir is all about what’s inside the author’s head.  Which way is likely to bring you better understanding and more peace? Can you look at your life as a biographer would?

I find that seeing my life from the outside, seeing my part in a bigger story leads to self-compassion and understanding.  I can see how other people and I are sharing a stage, living out scripts and story lines which aren’t always about us.  When I forget that view and focus on myself as individual, I do some silly things.

A few months ago our family went to a fancy brunch with live music on Fillmore Street. The lead singer went among the tables recruiting people to sing lines from whatever standard R and B number the band was playing. I started thinking about what I would do if she came to me. Would I make a fool of myself? Would I have the courage to sing? Would I get applause? What would people think of me?

Really, can you imagine anything more pointless?  Nobody in that restaurant would care one bit how I sang. Nobody noticed the other people who sang. It didn’t matter how awful they were, because the point was to have fun. In my head, I was making the scene about me, when actually I was an extra.

8 Responses to The Story of Your Life