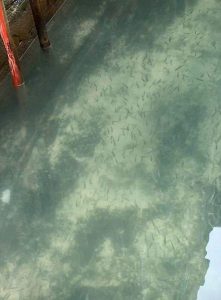 A germ has closed the world. Economies are shutting down; culture has been put on hold. No restaurants; no bars, clubs, concerts, sports, or theater. No religious services or political events.  Schools, libraries, museums all closed. Nowhere to go, and not allowed to go there anyway. People left without sources of income, connection with others, or things to do.

If this lasted just one or two months, society might recover.  But health officials are saying house arrest could go on much longer if necessary. Half the economy and most of our cultural outlets will be gone by the time they let us out. But the quarantine has its positive sides, side effects of the negative ones.  The damage capitalism does can best be seen in the good things that happen when it grinds to a halt.

The quarantine has spurred governments to consider measures that have long been needed, but never taken seriously until now.

For positives to outweigh the negatives or come anywhere close to them, people’s lives will have to change. A good life will be evaluated as one which helps others, not one that accumulates wealth. But we will have to fight for this. This is a crisis like we’ve not seen in our lifetimes – a time of danger and also of opportunity. Hope to see you out there, helping and fighting.

One Response to Corona Lockdown: Catastrophe and Blessing