A Lesson from Roses 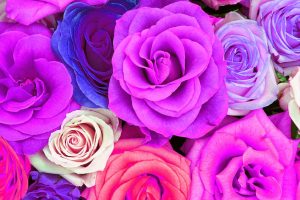 Last month, I wanted to visit my old friend Shirley, who lives in Laguna Honda Hospital in SF. We used to co-lead a multiple sclerosis support group, until she became too disabled to live on her own.

I don’t see Shirley very often, but Nov 10 was her birthday, the day after mine, and I usually go celebrate with her. That morning, I had a date with my friend Kim to go to Golden Gate Park, and as we were splitting up, Kim asked if I had brought a card or a gift for Shirley. I hadn’t, but thought I should. I felt guilty about not giving Shirley anything, but I was in a hurry; it was getting late. Kim had to drag me to a nearby Rexall store to buy a card.

As I was paying for the card, Kim noticed some flowers wrapped in newspaper sitting on a table or windowsill near the front of the store. She asked the store clerk/manager ‘Whose flowers are those?’ He looked over and said, “Oh, I know who left them. He won’t be back.” And Kim said, “Can we have them?”

You know that expression, ‘My jaw dropped’? This was the first time I remember my jaw actually dropping open in surprise; I was so astonished. I mean, I would never have considered asking to be given twelve gorgeous roses that I hadn’t paid for. It would never have occurred to me. But the store guy said, “Sure, take ‘em.”

Outside the store, Kim gave me a hug and the flowers. I felt amazed and delighted. A few minutes before, I had been going to see my friend emptyhanded, and now I had a card and a gorgeous bouquet to share, and it was free! I took the roses to Laguna Honda where I gave half of them to the nurses, who gave me a water pitcher in which to put the other six. A nurse took time from her work to cut the stems so they would fit.

Shirley loved the roses; she lit up seeing them, understandably, since there’s not a lot of beauty in a hospital room. Looking at those dark red flowers on her side table gave me a feeling of joy. And it was all so undeserved!

I thought about this experience for weeks. It still makes me cry to remember it. Why was I astonished that someone asked for something she wanted, and wanted for me, actually? It took me days to realize the depth of the scarcity beliefs and Puritan ethics I have absorbed and lived all my life. I have believed, without knowing it, that people should only have what they work for or what they can buy.

What a strange way to look at the world! Do we only get what we work for? Really, isn’t the world always giving us stuff? I mean, the Sun never stops giving. Neither does Earth stop producing life that becomes food to keep us alive. All of this is gift, so where does this sad work ethic come from? It’s a human thing to keep the economy growing; it’s certainly not from God.

How would life be different if we looked first at the gifts? Just today, I took out a book from the library and, because of rain, put it under my overcoat to keep it dry on the way home. When I got up to the apartment, the book was gone! I didn’t know where it had slipped out. I was freaked; I needed to read that book for an essay I’m writing, and I hated the thought of a library book being destroyed in the rain.

I went back out to retrace my steps and find it, hopefully before it got soaked. When I got to the lobby, my neighbor Sue, who is also in a wheelchair, handed me the book. “I was a half block behind you and saw you drop it,” she said. People keep doing things like that, and I guess I do things for others, and maybe that is how the world works.

Work is still important. I guess. But maybe it depends what you mean by work, and it depends what we mean by “enough” or by “blessed.” For me, the important thing right now is to be more aware of the gifts in life. I’m sure those roses aren’t the last flowers the world will provide. Sometimes, though, I may have to ask for them.

Postscript a week later – The world keeps rubbing my face in the need to accept what is given and ask for what I want.  A few days ago, I had to be in two places at once – taking an exam and delivering money to a friend in need. I decided I would zoom through the test, then leave class early and hope to be on time.  On the way to class, I ran into the professor and told him I would have to leave after the exam.  He said, “Go ahead and leave now. You can take the test later.”

4 Responses to A Lesson from Roses