I’m a little old for First Communion, but it was a powerful experience, so I’m sharing it.  Here’s how it happened.

One Sunday in December, I attended the annual conference of Friends of Sabeel, a Christian coalition supporting Palestinian rights. It was held at St. John’s Presbyterian, a gorgeous church in San Francisco with beautiful stained-glass windows and an arching cathedral ceiling. The meeting was preceded by the church’s religious service.

I got there near the end of the service, in time for the Holy Communion, also called the Eucharist.  I had heard all my life about communion, but I have never understood it or partaken of it before.

Four women held baskets of bread and bowls of juice in the four corners of the chapel. People lined up to take a piece of bread and dip it in the juice.  When I reached the front of the line, the woman holding the basket said, “This is the body of Christ.  This is the sacrifice he made.” (I’m not sure I heard that last sentence correctly. There are different versions. But it was something like that.)

I had read about Catholic communion, which is pretty much the same thing. Some believe the actual body of Jesus is “transubstantiated” into the bread and wine. It’s sometimes called The Lord’s Supper, after what Jesus is reported to have said at his last supper with his disciples, “This bread is my body, given for you. This cup is my blood, poured out for you…Whoever eats my flesh and drinks my blood remains in me, and I in him.”

Others think communion is a symbol, an affirmation that worshippers are united in Christ. Not really being part of that community, I didn’t know what to think.

So, I was surprised when I got the bread and heard her words, and tasted the bread, I felt like a light was shining on me.  I understood, without thought, that every time we eat or drink, we are literally eating God’s body, of which the Earth and everything on it, including us, are part.

Everything we eat is a gift from God, coming to us from the Sun, through the Earth. The blood sacrifice is real too: for almost everything we eat, someone gave up their life. And all those lives, plant and animal, are part of God, in the same way that we are.

That may not be a mainstream Christian belief, but it is central to most Eastern religions and to mystical traditions everywhere. God and the Universe are the same thing. 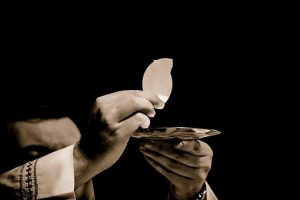 The Eucharist – photo by Robert Cheaib

I wonder why we can’t celebrate communion every time we eat, then.  According to the Christian website Compelling Truth, The Apostle Paul said to remember Christ every time we eat bread or drink wine, but he also warned against just going through the motions. It should be a proper ceremony.

Some Christians believe you can only do communion in a church; or at least with an ordained minister. Most say you have to focus on Christ while you’re tasting the bread.  So far, I’m not including others in a ceremony, but I do think of Communion before I start and as much as possible during a meal.

I sometimes think, ‘This is what God tastes like.’   Some people might think that’s weird, or even that I’m being blasphemous. It doesn’t feel that way to me; it’s an act of worship. It makes me stop to appreciate food and all our gifts more.

I find that preceding each meal, or each bite, with ‘This is the body of Christ’ vastly increases my sense of the gift that food is. It’s not just giving thanks; it’s joining with the food, all of us being part of the same wholeness, with its constant birth and death, killing and being killed. It’s an endless dance, and Communion keeps me in touch with the wonder, grief, and beauty of it all.

I don’t know if I’ll return to church, but I probably need to go somewhere. Taking these ceremonies and beliefs away for their contexts and communities is probably missing much of the power of them. I also plan to continue tasting God in my food until the World tells me to stop. Maybe you will, too.