Because It Can’t Last

“Do not confuse value with permanence.” – Irvin Yalom

Charlie Jane Anders hosts the Writers with Drinks literary events every month at San Francisco’s Make Out Room. The dimly lit club drips with streamers, glitter, a jumble of art work and animal imagery, like Christmas on an acid trip.

Five or six writers perform at each event, but most people don’t come to hear them. They’re there for Charlie Jane. Her introductions of each segment and of each writer careen wildly through time, space, and dimensions unnamed. She’s funny; she’s bizarre; she awakens thoughts and emotions in listeners even though we can’t understand what she’s talking about much of the time.

I thought her intros would make great written pieces or video. Longtime Writers with Drinks fans assure me, though, that they wouldn’t work in those forms.  They’re not meant for stasis or posterity; they are of a specific time, place, and mood.  Part of their power is their immediacy, and part of it is Charlie Jane’s presence. Without those, the words themselves wouldn’t mean much to a listener. An animatronic figure of Charlie Jane performing one of her monologues might be exhibited for 10,000 years in an extraterrestrial museum, but few would go to see it. It would just be a curiosity, whereas for one night, the real Charlie Jane is spectacular. 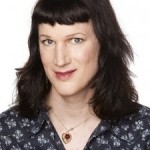 6 Responses to Because It Can’t Last