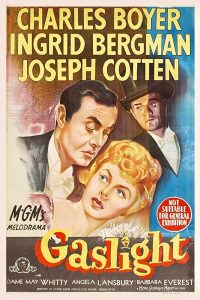 Letter received from a US intelligence agency:

Dear Patriot,
Thank you for defending your government and your corporations from disinformation and fake news. Each day, our shared understanding of reality is being challenged. Each day, new stories and facts undercut our approved narrative. We need good citizens like you to make sure alternative information is not seriously considered by any except a lunatic fringe.

One way to control information is called ‘gaslighting,’ meaning to push people to deny their own experience and believe things for which they have no evidence. The term comes from a 1944 movie called Gaslight, in which a man (Charles Boyer) plays a series of tricks on his new wife (Ingrid Bergman) to convince her she is crazy. Some of the tricks involve the gas-powered light system.

Boyer torments Bergman to get her into an insane asylum, so he will have the house to himself. Sometimes, your government has to do things like that, too. The USA is our house, and we need to protect our American way of life, even if it means making a few people crazy.

Gaslighting is not easy, though; people don’t readily disbelieve their senses or embrace ideas without evidence. That’s why we prepared this handy list of strategies you can use — the same ones we use — to maintain your narrative.

2. Yell ‘Science’ at anyone who disagrees. Although science normally involves evaluating all sides of an issue, we define science as whatever evidence supports the government’s story. Claim “mountains of evidence” to support the official position, or call those who disagree ‘science deniers.’ Example: Follow the science that says hydroxychloroquine doesn’t work for COVID-19; ignore the science that says it does.

3. Use terms like ‘discredited,’ ‘disproved,’ and ‘debunked’ to describe noncompliant beliefs, without providing any evidence of where they are wrong. Example: claims that 5G wireless radiatio causes health problems are ‘debunked,’ even though there has been little or no research.

4. Don’t be afraid to change your story, and never acknowledge that you’ve changed. Osama bin Laden’s al-Qaeda were our friends in Afghanistan, then our enemies in the War on Terror, now our friends again in Syria. Truth can change; people forget. President Trump changes his message every day, and nobody seems to notice.

5. Don’t be afraid to be absurd or ridiculous. Look at what we convinced people to believe on September 11, 2001. A hijacker’s passport miraculously ‘found on the ground’ near the World Trade Center. Three steel skyscrapers crashed straight down, which no other skyscraper in history ever has done without a controlled demolition. An airplane ‘crashed’ in Pennsylvania, leaving virtually no wreckage. It doesn’t matter how absurd our story is: just keep acting like it’s completely rational and call disbelievers conspiracy theorists.

6. Repetition — The more often people hear something, the more likely they are to believe it. That is why we tell the same story in 100 different ways on multiple media platforms. Remember that a story can be disproven many times, and people will still believe it if it’s said often by an authoritative voice.

Example: liberal media kept repeating Russia collusion narratives about the 2016 election, despite every single specific claim being shown baseless. After three years and several investigations, when all the charges fell through, these platforms acted like those years were no big deal. Our media still blames Russia for everything and attacks President Trump as a Russian puppet, and people still believe them.

7. Cancel the skeptics — Point to something they have said in the past, on any topic, that can be used to make them seem ridiculous, racist, or some other disqualifying trait. Or point to some other person they have associated with who is so disagreeable that mere association disqualifies the speaker. Example: when Rep. Tulsi Gabbard appeared on Tucker Carlson’s Fox TV show, liberals immediately said her antiwar message was now out of bounds, because “She went on Fox!”

8. If you’re in a position of authority, sympathetically tell people you approve of their demands and understand their position, while doing nothing at all to address their grievances. They must be crazy if they can’t see you’re on their side.

9. Remember, the goal isn’t to convince people of your position. It’s to make them doubt themselves, doubt reality, and ultimately to give up and say, “Whatever.”

We can’t overstate how important this work is. Facts in specific cases may clash with our stories, but we must uphold the larger truth — that America, our government, and our corporations are good and our opponents are evil. Winston Churchill said, “Truth is so precious it must be attended with a bodyguard of lies.” You are part of truth’s bodyguard. Thank you for your efforts on behalf of America!

This entry was posted in Uncategorized and tagged 9/11, COVID-19, propaganda, Russiagate, truth. Bookmark the permalink.

Trail Guides
"The highest form of intelligence is to observe without evaluating." – Jiddu Krishnamurti