Our Leaders Are Psychotic

We have to take power over our own lives

When powerful people are used to being right all the time, they may find it almost impossible to admit they are wrong. In his excellent book Black Box Thinking, Matthew Syed gives examples of how unwillingness to admit failure has led to plane crashes, wrongfully convicted innocents, patients dying from malpractice, companies going bankrupt. Syed shows that people’s inability to change course when failing often leads to disaster.

How far does this psychological block go? The Wall Street Journal (WSJ) just told us; it goes all the way to eternity. WSJ headlined a full-page opinion piece on April 27, “The US Should Show It Can Win a Nuclear War.” Written by Seth Cropsey, a former undersecretary of the Navy, the piece is an unhinged recitation of lies about Russian “atrocities” and “intentions to dominate.” He acknowledges Russia’s threats to use nuclear weapons if NATO continues to arm and support the Ukrainian government, but he sees the answer as increasing US nuclear power to intimidate Putin into backing down. He advocates increasing US military advantage with thousands of new nukes, to the point where Russia would not have the capacity to retaliate if we nuked them first.

This is madness beyond anything I’ve seen in my adult life. The US is so committed to being the sole dominant power in the world that, rather than share power with Russia or China or anyone else, they would blow the whole thing up. For 70 years, the world avoided nuclear war by the policy of mutually assured destruction (MAD.) Neither the US nor the USSR could use nuclear weapons without being destroyed in return, so nobody used them. Even non-nuclear combat was avoided, because of the danger of escalation to nuclear war. Now experts like Cropsey are saying we must not only be able to “win” a nuclear war; we have to “show we can win it.”

What does “winning a nuclear war” mean? Cropsey doesn’t say, but it seems to mean having some kind of functional government left while your enemy is wiped off the face of the Earth. It would certainly mean mass suffering and death on a level never seen or imagined before, and that’s the best case scenario. More likely is a nuclear winter and death of most everything on Earth, an outcome no sane person in the US, Russia, Ukraine, or anywhere else would want to risk. 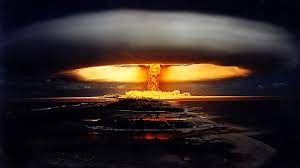 Why do people act this way? Syed’s book attributes most reluctance to change to “cognitive dissonance,” meaning that admitting we have been wrong conflicts with our deepest beliefs about ourselves and the world. This conflict is extremely uncomfortable and explains why powerful people will keep doubling down on failed strategies, long past the point where they are obviously not working.

The entire US power structure appears to be experiencing dissonance as China and Russia develop. US leaders have committed to “full-spectrum dominance” of the world. It’s not enough for them to be #1; they have to be the one and only. They will not allow even a potential rival, an approach clearly stated in the 1997 document Rebuilding America’s Defenses by the Project for The New American Century. After 25 years of this uniquely paranoid and destructive belief, it may be next to impossible for them to change voluntarily.

Vladimir Putin may be having similar cognitive dissonance now, with US and NATO sending massive amounts of weapons and money to Ukraine, making it a far more formidable foe than he had anticipated. He can’t back down, a dynamic that happens frequently in wars, so they don’t end until the enemy marches into your headquarters and kills you. We are now hearing analysts saying “Neither side can afford to lose.” If losing is out of the question, will they negotiate a compromise, or will they double down on winning and gamble away all of our lives?

At this point, Russia is throwing around threats of nuclear attack because, with US and NATO ganging up on them, they feel desperate. That doesn’t make them right, but they have been very clear about it for decades. Maybe they are having a national case of cognitive dissonance, or maybe the US and NATO are having one. Maybe they all are, but we don’t have to join them.

The need to dominate the world isn’t only psychological; it’s economic. Cognitive dissonance is built into capitalism, when the rich willfully choose to believe their system is sustainable when it clearly isn’t. Then we get wars.

War can never stop for long under capitalism, because of what Karl Marx called its basic contradictions. Capitalism needs to continuously expand, so corporations can maintain profits and pay back the interest they owe. Profits always tend to drop, because competition drives down prices. Meanwhile, wages can only be reduced so much before workers quit or starve to death. So, corporations must keep growing to remain profitable, but other companies are trying to do the same thing. Wars happen because there’s no room left for companies to expand. All the spaces are taken.

This was the cause of World War 1, not all the assassinations and alliances we learn about in school. The imperialist powers of Europe had run out of countries to conquer and had no place to expand except by taking on other imperialists. When the violence of war had destroyed much of Europe’s economies, there was room to expand again as they rebuilt.

Capitalist economics, along with leaders’ inability to admit they were wrong, was the only reason for that war that killed between 15 and 25 million people. After 20 years of rebuilding, European imperialism was back in the bind of no room to grow, hence World War 2 that killed over 70 million people in Europe and Asia. To build support for these wars nobody wanted, civilians on both sides were fed steady diets of propaganda about how evil the other side was. Exactly the same techniques are being used on us today — atrocity porn: civilians (supposedly) massacred, hospitals (supposedly) bombed; fear of invasion (‘Putin wants to take all of Europe!’), glorification of our troops and allies (Zelensky the hero!). The playbook hasn’t changed in 100 years.

The fall of the Soviet Union in the 1990s opened up huge space for expansion in Asia, so capitalism hasn’t needed a World War 3, until now. They had a long series of small wars in colonized countries instead, but now China is taking up too much space. We’re back in that primary contradiction of needing room to grow.

To summarize, we now have systems where individual leaders like Putin and collective leaders like tech, finance, and military industry oligarchs are trapped in a psycho-economic maze that leads inevitably to war. The whole capitalist system is running that maze which, since neither side can “afford to lose,” now means nuclear war. They won’t change course of their own accord. They can’t; it would be psychological and financial agony for them. We have to do it for them.

What can we do?

World War 1 killed everything in Europe for four years. It didn’t stop until the socialist revolution in Russia, something that scared the capitalists even more than economic collapse. Socialism doesn’t have the built-in need for growth and the boom-and-bust crises of capitalism. Although people weren’t very prosperous under authoritarian socialism, they could live with it, but the mega-rich couldn’t.

Could we prevent war with such a revolution now? I’ll tell you one thing: our rulers think we can and are doing all they can to stop us. They have their propagandists and their police agents working full time to suppress people’s opposition from the Left or Right to their murderous system. They’re cutting back on free speech with the help of the tech industry. They’re dividing us by color, gender, sexual preference, age, religion, taste in music, and every other way they can think of.

I doubt the rulers’ fear is justified. People are profoundly disorganized; we all think we’re on our own. In 1917 Russia, there were workers’ councils called Soviets that could take over and run things. Here, few workers even have unions, and those unions are far from revolutionary.

But maybe the belief system that can organize us has yet to appear. Look at what’s happening in Sri Lanka, where hundreds of thousands of people are coming out in a militant general strike, occupying town squares against their government’s crimes. People are doing similar things in France right now. They’re finding each other in the streets. They’re doing it because they’re desperate. We may not be desperate enough in the US yet, but we soon will be.

I don’t know what our unifying goal will be. I hope it has something to do with committing to regenerating our planet, living in harmony with Life, not focusing on death. That’s kind of a vague goal, but we need to unify on something, and we need to start now. Our leaders are psychotic; we need to be the sane ones, even if they kill us for it.